What is an Amish Oatmeal whoopie pie? Or maybe the simpler question is, What is a whoopie pie? A whoopie pie is simply two cookies with frosting sandwiched between them. Some people also call them gobs.

But I grew up in Lancaster County, and we always knew these sandwich cookies as whoopie pies. The most common whoopie pie is probably the chocolate whoopie pie, but we used to make different variations, such as oatmeal whoopie pies, pumpkin, and chocolate chip. 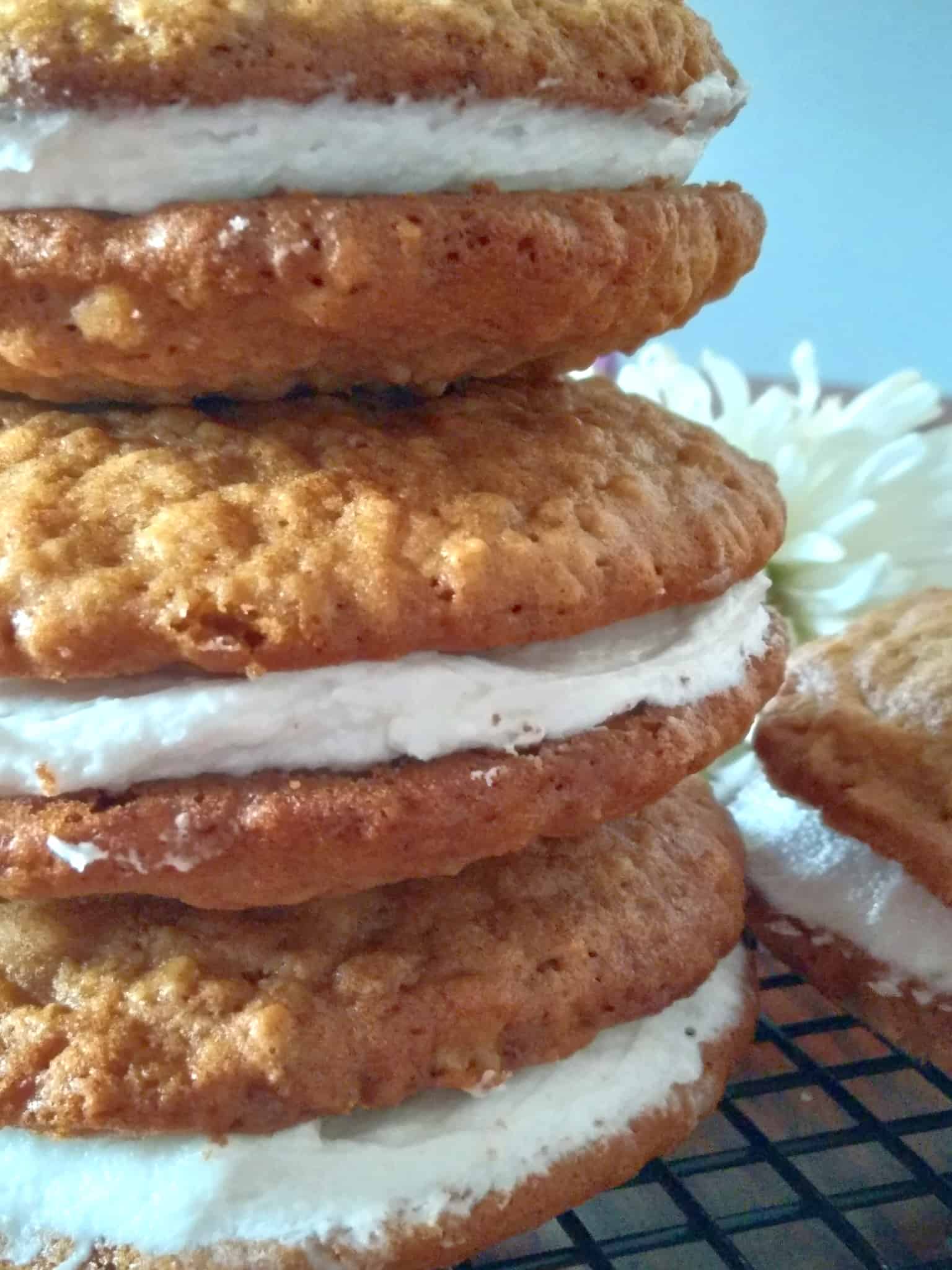 The Amish oatmeal whoopie pie is similar to the Little Debbie Oatmeal cream pies. But, of course, the homemade whoopie pies taste better!

I have no way of knowing for sure where the Amish whoopie pie recipe originated or where its name comes from? But some seem to think that they originated with the Pennsylvania Amish housewives. One theory for the origin of the name goes like this: An Amish housewife invented the whoopie pie with remnants of cake batter and frosting. And when her kids found it in their lunch box, they exclaimed "Whoopie!"

That's a humorous theory 🙂 and I don't suppose that we will ever know for sure where the name came from. But one thing I do know is that whoopie pies are amazing, and they are a well-loved treat among the Amish and my family as well.

My mom-in-law used to can and sell gourmet pickles. And in the fall we took the pickles to numerous craft shows to sell. So for a few years, I also baked several trays of Amish whoopie pies to take along and sell. There were some interesting reactions when people walked by our table and saw my sign for whoopie pies. But they were a great seller, and I never had enough.

How to make oatmeal whoopie pies: You start by mixing the cookie dough. It's pretty much a regular oatmeal cookie recipe. Mix your ingredients and drop by scoopfuls onto your cookie sheets. Bake and cool.

My cookies never seem to all turn out exactly the same size, shape, etc. So I pair up my cookies with one that's closest to the same.

Now you need to whip up a batch of the Amish whoopie pie filling recipe. Spread a layer of filling on one cookie and top with its partner.

This Amish whoopie pie filling recipe has raw egg whites. It makes a very light and fluffy frosting. But if you don't feel comfortable eating raw egg white then simply omit the egg white. Your frosting should still turn out ok. Whenever I made them to sell, I used a whipped buttercream frosting recipe instead. Because I did not want to sell anything with raw egg whites in. But when I make them for us, I use this recipe.

Wrap each individual whoopie pie in plastic wrap to store. And honestly, if you can keep everybody from eating all of them the first day, they are moister and taste even better the next day. You may want to make a double batch of these cookies because they disappear fast.

A cookie scoop is nice for making these. It's less messy than using a spoon and it's easier to get uniform-sized cookies.

This whoopie pie recipe only makes about ten giant whoopie pies, but you could use a small scoop and make mini whoopie pies. 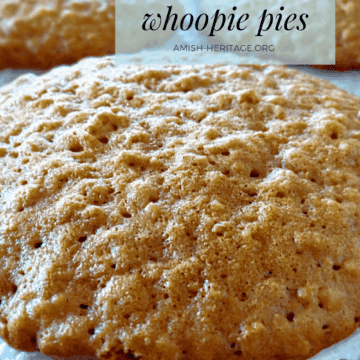 You can substitute 1/2 of the butter for shortening if desired. I like flatter cookies, especially when making whoopie pies. But if you like fatter cookies, you may want to add an extra 1/2 cup of oats. This recipe makes about 20 small whoopie pies or 10 large whoopie pies.  The frosting contains raw egg whites. They help to create a light and fluffy frosting. But if you do not feel comfortable with eating raw egg whites just omit them. Your frosting should still turn out ok. If it's too thick just add another Tbs. of milk. Or fill them with your favorite buttercream recipe. 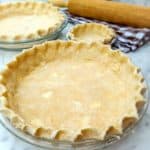