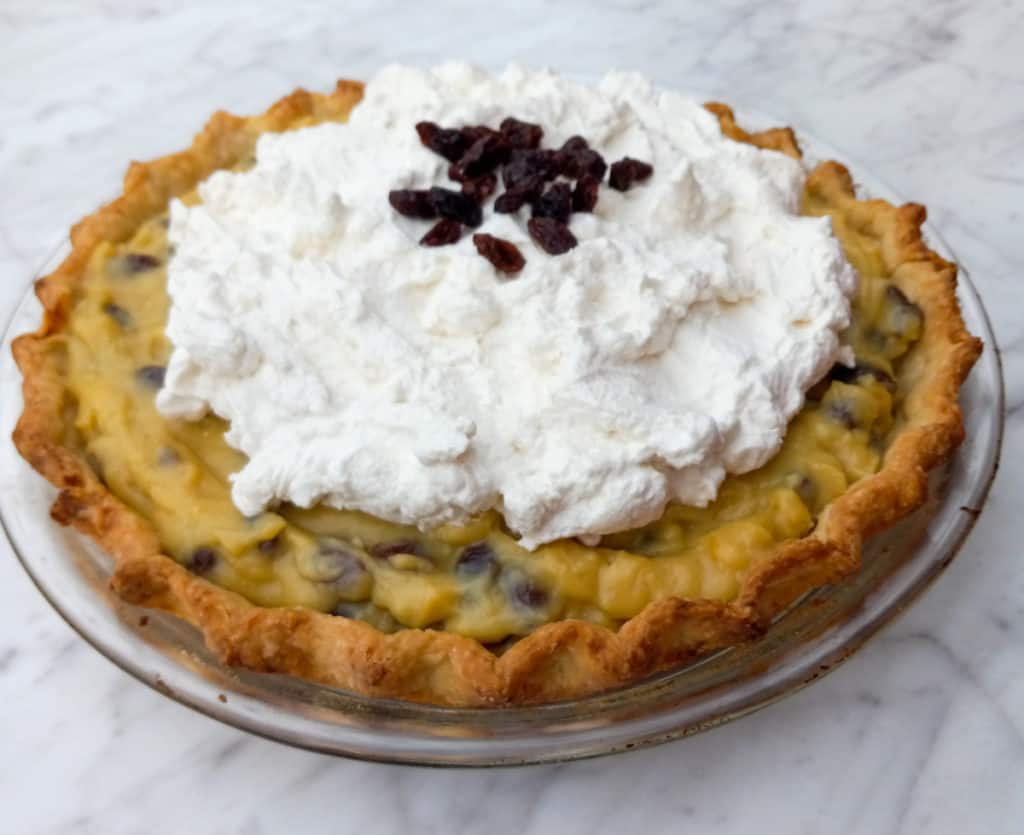 Perhaps you’ve never had the privilege of tasting a slice of Amish raisin cream pie. So you may be feeling a bit skeptical and thinking, “Raisin pie? That doesn’t sound very appetizing.”

But let me assure you that raisin cream pie actually tastes much better than it sounds.

With plump juicy raisins encased in a sweetened, creamy, custard filling and topped with whipped cream, this old-school pie is incredible! The flavors and textures work well together. And I’ll take a slice of Amish raisin cream pie any day.

So unless you really hate raisins, do yourself a favor and give it a try. You might be pleasantly surprised.

Chances are that your grandma made raisin pie sometime in her life since this pie has been around for generations. And traditionally, raisin pie was also called funeral pie.

Dating to the 18th century, German colonists in the early United States often brought raisin pie to funerals, giving it the nickname “funeral pie.” And the reason for this was very practical.

Before there was refrigeration, fresh fruits were not readily available. But since raisins have a long shelf life and are available year-round most homes had dried raisins on hand. And these dried fruits made a delicious pie filling no matter what time of year a funeral occurred.

Although, their recipe for homemade raisin pie was probably different than this creamy raisin pie. It would most likely have had a filling made with water, raisins, sugar, spices, etc., and topped with a second crust.

But honestly, I much prefer creamy Amish raisin pie.

This raisin pie is very easy and quick to make, especially if you already have a crust on hand. You can prebake a store-bought crust, or use my flaky pie crust recipe.

Pie crust is actually quite easy to make, and my recipe makes three nine-inch crusts. Although, I’ve also broken down the recipe for you, in case you want to make only one. But whenever I bake pies, I make three for our family. (You may need pie plates – affiliate link.)

Last week I prebaked three pie crusts and made one peanut butter cream pie, one Pennsylvania Dutch raisin cream pie, and one chocolate pie. They’re all amazing and never last long at our house.

And this recipe for raisin pie only uses one prebaked crust on the bottom. The top of the pie gets covered in sweetened whipped cream.

How to PreBake Pie Crust

A lot of people use weights when prebaking pie crust (tips on how to prebake a crust), but I’ve never used any.

I roll out my pie crusts, place them in the pans, and prick them all over with a fork. Then I place slightly smaller pie pans inside of my crusts (to keep the sides from collapsing) and bake them at 425 degrees for about 8 minutes. Remove the pie pans and continue baking the crusts until nicely browned (mine – in the photo above – got a little darker than I usually bake them).

Let me know in the comments below if you enjoy Amish raisin pie!

If You Love Amish Pies, You May Want to try More of My Pie Recipes… 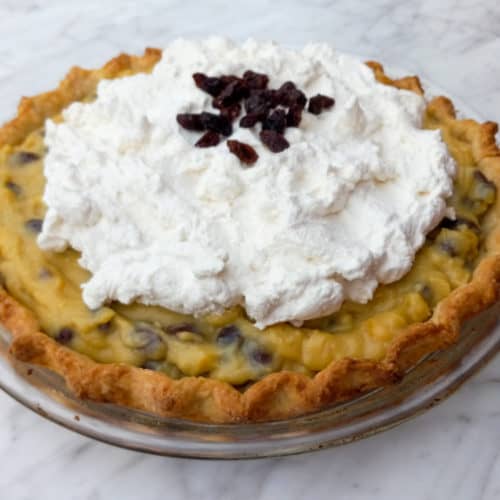 Feel free to add 1/2 tsp. cinnamon and 1/8 tsp. ground cloves to the pie filling, if desired. To make this pie ahead, you can bake the crust and make the filling a day or two in advance. Lightly cover the prebaked crust with a tea towel. Place the creamed mixture into an airtight container and refrigerate it. Assemble the pie just a little while before serving. Cream pies are the best when eaten within two or three days after being assembled.