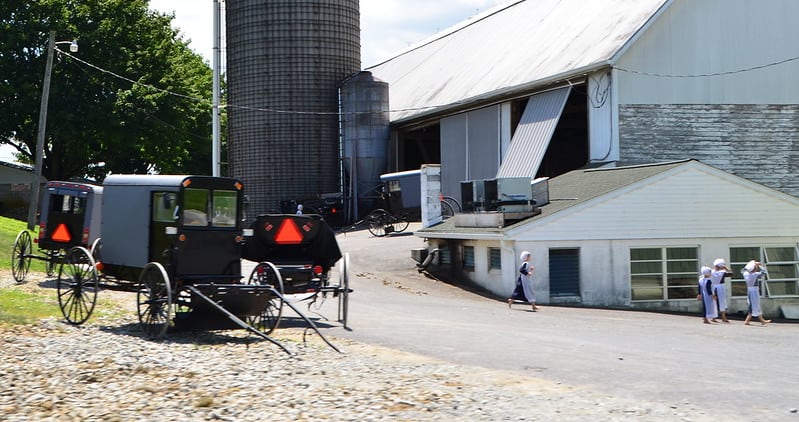 They have their roots in the Mennonite community. And both of these groups were a part of the early Anabaptist movement in Europe, which took place at the time of the Reformation.

The issue of infant baptism was crucial for early Anabaptists, who believed that baptism should be a choice made by adults. They believed strongly that only adults who had confessed their faith should be baptized.

And because of their beliefs, many early Anabaptists were put to death as heretics by both Catholics and Protestants. And many others fled to the mountains of Switzerland and southern Germany. (Some of these stories can be found in the Martyr’s Mirror.)

And due to their belief in adult baptism, this group was given the derogatory name “Anabaptists”, which means “rebaptizers”.

So the Amish still hold to their belief of being baptized upon the confession of their faith. Although, baptism has become more about joining the church than anything else.

Why Do the Amish Practice Baptism by Pouring Instead of Immersion?

So why do Amish baptismal ceremonies consist of pouring only a little bit of water?

As I’ve already stated, the early Anabaptists, who took a stand against infant baptism, were persecuted for their beliefs. And they often had to meet in secret.

They had been baptized as infants in the Catholic Church but were now being rebaptized. So you can imagine that if they had to be baptized in secret, it was a lot easier to baptize by pouring rather than trying to get to a body of water.

So according to tradition, the early Anabaptists used pouring as a method to baptize.

And if you know anything about the Amish, you already know that they often reject change. They hold fast to the traditions of their forefathers (sometimes even when it doesn’t make sense and is not Biblical). So the Amish and conservative Mennonites still practice baptism by pouring.

There are a lot of differences in Amish groups, especially between the New Order Amish and Old Order/Swartzentruber, etc. (stricter orders).

I grew up New Order Amish. And in our churches, most of the youth were baptized and joined the church between the ages of fourteen and sixteen.

But in many Amish churches, the age for baptism is typically between sixteen and twenty-five.

The Old Order Amish youth begin their rumspringa years at the age of sixteen, and then they get baptized once they’re ready to settle down and join the church.

When you are baptized, in an Amish or Mennonite church, you automatically become a member of the church.

And you have to be a member of the church to get married as an Amish person.

So guess what happens once a young person wants to get married? You guessed it. They will be baptized and join the church so that they can get married.

I believe the Bible teaches that baptism is a sign to the world that you have decided to follow Jesus. But in the Amish church, baptism has become more about joining the church.

The candidate for baptism is baptized upon their confession of faith in Jesus, but many times the focus is on their promise to be faithful to the church.

And when you get baptized, you are committing yourself to the church and to keeping its rules. So it’s important to understand the consequences of breaking the rules before you become a member.

And this is the reason why many of the Amish take it so seriously when a person leaves the church that they were baptized into. They believe that you are breaking your promise to God to stay in that church.

Why Did I Join the Amish Church?

It might be surprising to you (or maybe not), but most kids that grow up Amish end up joining the Amish church.

There is a small percentage that leaves before they become a member. But the greatest majority stay in the Amish faith.

I grew up in a New Order Amish home. And as a kid, I never questioned our way of life. We were taught the Word of God, and Scripture verses were explained according to the Amish people’s interpretation.

And I thought that we were the only ones who truly understood Scripture. We were following God as He wanted us to, living lives that were holy and set apart from the world.

The head covering was important. Wearing cape dresses was the only way to be modest. And we were not supposed to look or act like the world. We were supposed to keep the traditions of our forefathers.

And there is a feeling of security in being a part of a tight-knit community.

So those were all legitimate reasons why I should accept my parents’ faith and remain Amish. I never questioned whether I should join the church or not.

Encouragement from parents and peer pressure from friends had a significant influence. So, I did what everyone expected me to do.

And in our church, it was expected that you would join the church around 14 or 15 years of age. So whenever my friends started instruction class, I joined them and became a member.

How to Become a Member of the Amish Church

Before joining the Amish church, you have to take a nine-week series of instruction classes.

The Amish only have church every other Sunday. And at the start of their church services, while the congregation is singing, the ministers (Bishop/Deacon/Preachers) file out into a separate room to have a time of sharing, etc.

And every half year, after their spring and fall communion services, they open it up for baptism candidates to take instruction classes.

The candidates will file out with the ministers and spend about 30 minutes sitting under their teaching from the Dordrecht Confession of Faith booklet. This contains the founding doctrines of Amish and Mennonite beliefs. (I’m leaving this link where you can view the statements of faith.) (And an affiliate link where you can purchase the booklet, in case you’re interested.)

After taking the nine-week instruction classes, the ministers meet with each individual to have them share their personal testimony of faith in Christ, as well as gather with the candidates and their parents. They want to make sure that everyone is in agreement that the candidates are prepared for baptism. (It was a nerve-wracking experience to meet with the ministers.)

*Note: This is how it was done in our church. But it doesn’t mean that it’s done exactly like this in all Amish churches.

As the service is coming to a close, the bishop reads the Scripture about Philip baptizing the Ethiopian eunuch, found in Acts 8: 26-40.

The baptismal applicants sit in the front, close to the preachers. And when the ceremony begins, they are asked to kneel.

The bishop follows the pattern that’s found in Acts 8:37, asking each candidate if they believe that Jesus Christ is the Son of God.

The candidate replies, “Yes, I believe that Jesus Christ is the Son of God.” (Of course, all of this is in German.)

And I think there’s another question or two about commitment to the church and keeping the Ordnung, but I can’t remember what they are.

Upon their reply, the bishop cups his hands over the candidate’s head. Then the deacon pours a bit of water three times, as the bishop says, “I baptize you in the name of the Father, the Son, and the Holy Ghost.”

Then he tells the candidate to rise and be a faithful member of the church. And this is followed by a holy kiss. The bishop shares a handshake and kiss with the guys, and the girls share the kiss with his wife. (Side note: Once you’re a church member, you greet other members of the same sex with a holy kiss on the cheek.)

So after you’ve been baptized, you are expected to obey the rules (Ordnung), take part in communion, and behave as an upstanding member of the church.

Men must be open to becoming a preacher if they should happen to get voted in, and the lot falls on them.

If you disobey the rules and are not willing to repent, eventually you will be excommunicated.

And in the stricter Amish churches, you will be shunned if you leave the church. Thankfully that was not the case in our church, since the New Order Amish do not practice the ban/shunning.

Some of the Amish believe that if a member leaves the church, they will go to hell. They take their baptismal vows to the church very seriously.

More Articles to Read About the Amish…

Difference Between Amish and Mennonites

What Bible Do the Amish Use?

Where Did the Amish Originate From?